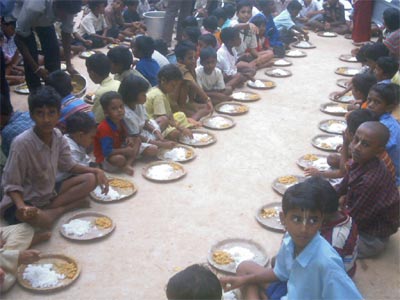 I would like to update you regarding the Bhaktivedanta Ashram’s school project that we have mentioned in previous newsletters. At present we are waiting for the rainy season to finish before we begin construction on the school project. This year there has been excessive rain and as a result many areas are flooded, including our land where the school is going to be constructed. The flood waters should recede by the end of December (provided there is no further rain), and then we will begin by raising the land above flood level and starting the construction of the school building (tentatively scheduled for the beginning of next year).

Once complete the school should be able to accommodate at least 1,000 students (with 9,000 square feet of class room space). In the meantime we have started an informal school for poor children from nearby areas around our Ashram, and around 150 children are attending each day. Many of these children would previously spend their time begging, rummaging through garbage piles, and doing other such activities. One by one we have met with these children and spoken to them about the importance of their life and convinced them to change their lifestyle by taking interest in learning.

To see the transformation of these children was amazing. Most of them used to walk around covered in dirt, practically naked except for one or two torn rags. We have cleaned them up by giving them clothes, teaching them how to brush their teeth & take bath everyday, and by providing them with daily meals when they come for classes. Now they all look like clean, bright students and are taking so much interest in learning. These children will be the first students of the school once the project is complete, and gradually we will increase the students till there are 1,000.

Some of the children had told us that they used to go to school in government schools but stopped going because the teachers would beat them. Since they all came from poor families, and many were from so-called “untouchable” castes, the teachers didn’t like them coming to school and would not take any interest in their welfare. They would prefer to beat and punish these children so they wouldn’t come to school, while children from wealthy families were treated with care and respect.

Because no one had faith that these children could learn, they themselves began to believe they couldn’t learn and gave up all hope of becoming anything. Many of the small children would beg for money so that they could buy tobacco or even liquor. One of our smallest students who is just 4 years old would daily chew tobacco, which he would purchase by collecting old glass bottles from the trash. And children who were a little bigger, like 10 or 11, would wait by liquor shops so they could drink any drops of liquor left in people’s cups.

Our hope is that we can find these children and turn their lives around by giving them hope and encouragement. They have never been shown love or kindness in their life and as a result they live a very rough life with a hopeless future. Krishna instructs us in the Gita “sarva-bhuta hite ratah”, we must act for the welfare of all people. So it is our duty to try to help those who are in need, and who better to help than such innocent children. By taking a little time to show these children that we care for them and that we want them to succeed in life it will give them the encouragement to change themselves for the better.

Below are some of the pictures of the children attending our daily programs. When we first began these programs two months ago we started with three children from a nearby slum. Within a week the number had increased to 40 children, and today there are 150 children attending everyday. Most of the children are illiterate, so we begin by teaching them simple things like reading and writing. For recreation we have art classes (coloring, painting, drawing, etc.), organized games and sports. We also teach them lessons from the Bhagavad Gita and stories from the Panchatantra so that they can develop morally and spiritually. The pictures at the bottom show the children coloring “Matsya Avatar”. Most of these children had never held a pen in their life, so when we gave them pens to color with they couldn’t figure out how to hold them. Now the art class is their favorite activity of the day. 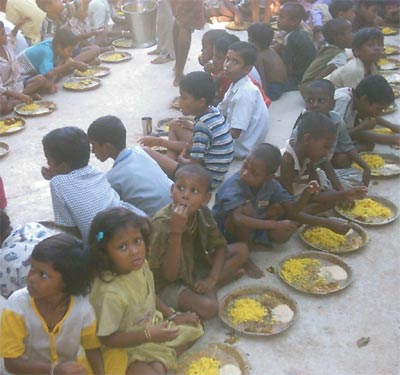 Children attending the Bhaktivedanta Ashram’s educational program are given sanctified food each day. 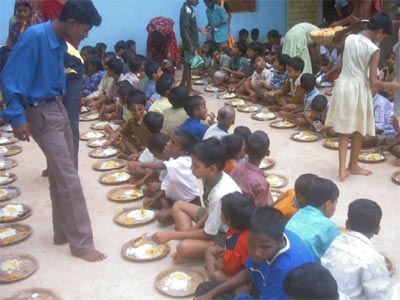 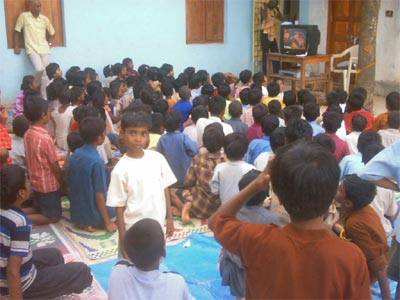 From time to time educational and entertaining videos are shown to the children, such as the Ramayana and Mahabharata Hindi serials. 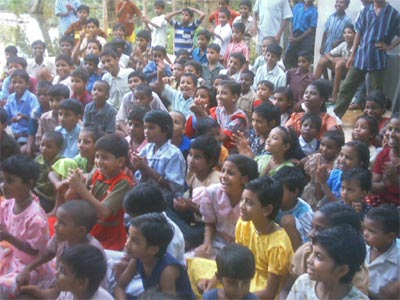 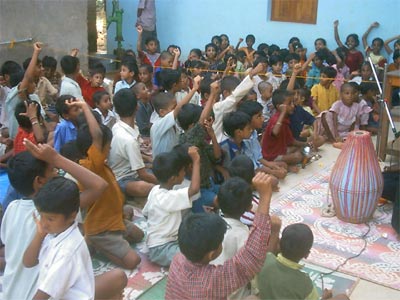 The children enjoy the classes so much that they attend on their own choice without the need for anyone to request them. 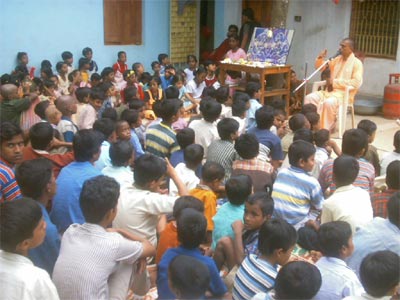 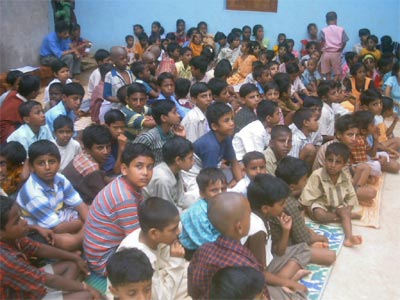 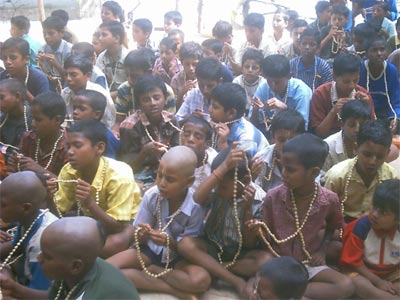 The children are also taught meditation for removing stress and strengthening their mind & intelligence. 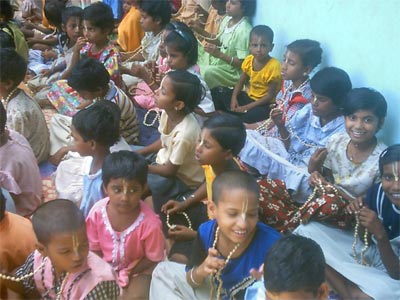 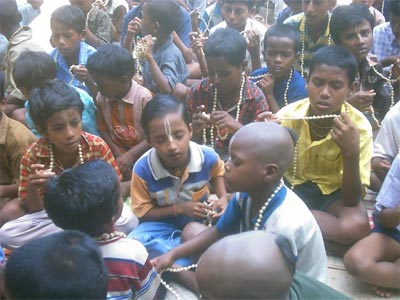 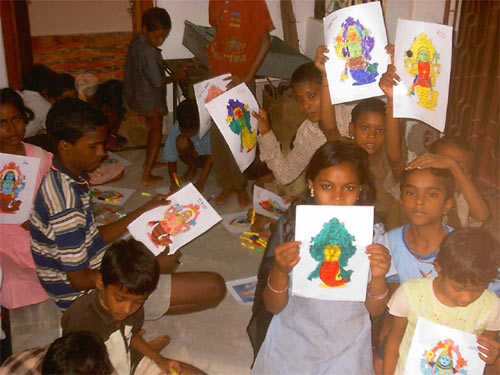 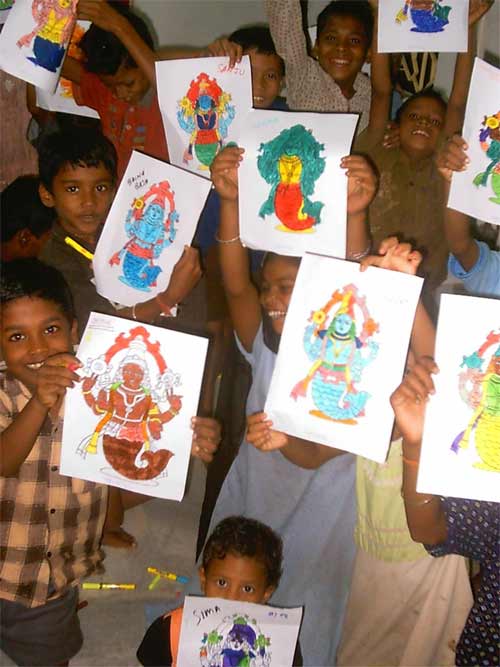